Osseous surgery, sometimes referred to as pocket reduction surgery, periodontal surgery or gingivectomy, refers to a number of different surgeries aimed at gaining access to the tooth roots to remove tartar and disease-causing bacteria. 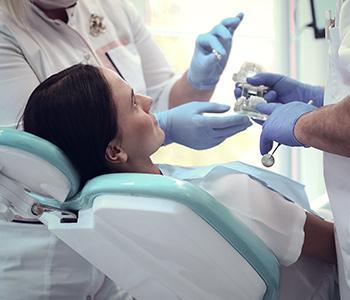 What does the procedure entail?

A local anesthetic will be used to numb the area prior to surgery. First, your doctor will cut around each tooth of the affected area to release the gum tissue from the bone. This allows access to the bone and roots of the teeth. After the roots have been thoroughly cleaned via scaling, a drill and hand tools will be used to reshape the bone around the teeth. Bone is removed in some areas to restore the normal rise and fall of the bone, but at a lower level. Bone grafting may also be necessary to fill in large bone defects.

Next, the gums will be placed back over the remaining bone and sutured in place. In some cases, the site will also be covered with a bandage (periodontal pack) or dressing. Pain medicine and mouth rinses containing chlorhexidine are generally prescribed following the surgery.

Do not be alarmed if bleeding and swelling occurs after the surgery. This can be controlled easily by placing moist gauze inside your mouth at the area of the procedure, and an ice pack on the outside of the affected area. In cases where the bleeding and swelling is in excess, it is advised that you call to notify our office.